Not the safest place to stand to take a photo, but he let me do it. In fact, he said it would be good practice for him. The philosophy behind Japanese Archery (also known as Kyudo) is that if you do everything the same every time, the arrow will hit the same spot every time. So there is a little ceremony you go through with specific steps before each round of shots. If he did everything the same and was concentrating properly, it shouldn’t matter if a crazy photographer was standing in front of him.

(I had a cunning idea to make it safer where he would not notch the arrow into the bow string. So even if his hand slipped, the string would come forward, but the arrow would not be pushed forward. I thought he bought into the idea. But when I moved away, he let the arrow fly, so I wasn’t as safe as I thought I was. I guess something was lost in translation. Oh well, I lived.)

Japanese archers shoot at very small targets from very long distances using arrows made from special eagle feathers. The bows require a lot of strength to pull back. It requires both a lot of strength and a lot of precision and delicacy. It really is impressive.

Kazuhisa runs the Uotoshi Ryokan in Yudanaka, Japan. It’s a great place to stay if you want a traditional Japanese ryokan experience. And he is happy to give guests a demonstration of Kyudo. It’s also a great place to see the Japanese Snow Monkeys. Highly recommended! 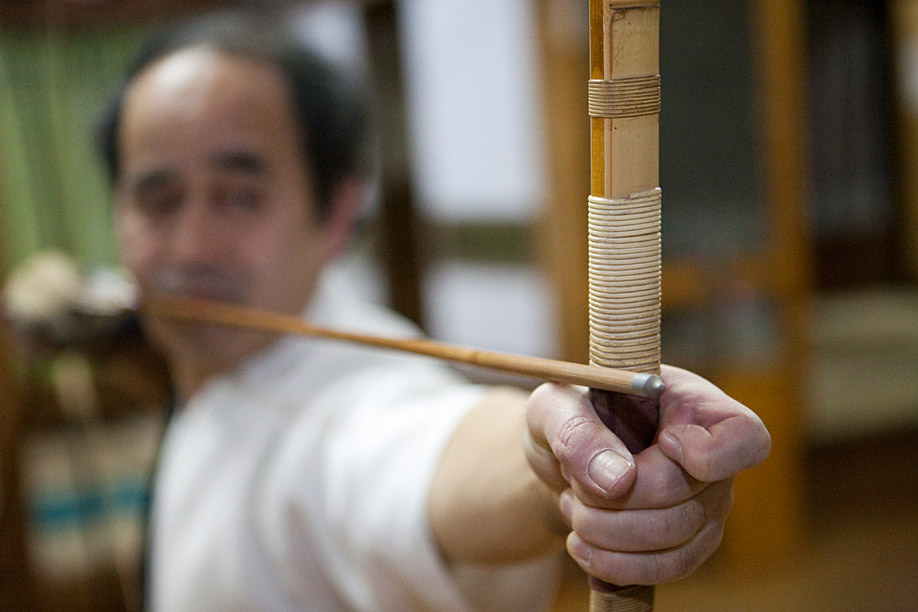